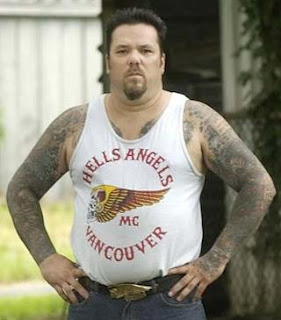 Robert Thomas is a Hells Angel in Kelowna. According to a media document he owns two properties in Kelowna despite sporting the Vancouver Hells Angels T-shirt when he was staring down the media during the Kelowna clubhouse raid in the summer of 2005.

Unlike Davie he seems to be able to control his drool but he does need more time on the StairMaster than Davie does. Not bad for a geriatric stud muffin. Is there something appealing about saggy arms and saggy bellies because I'm not seeing it.

In 2006 Bobby Thomas plead guilty to possessing a firearm in breach of his probation and as a result he has a lifetime firearm ban. He has convictions for break and enter and theft. The guy is just a low life thief. Now he has been charged in another murder.

His next conviction was 1991, failing to or refusing to provide a breath sample, $500 fine; 1995, an assault, a suspended sentence and probation for one year; and 2004, assault causing bodily harm and assault under the common assault sections for which he received a total of $1,500 in fines and a mandatory weapons prohibition under Section 109.

Another interesting character is Robert Daniel Thompson from the states who is another Hells Angel. He was convicted in 1987 for kidnapping a woman and served seven years in prison. As a result, he is listed as a convicted sex offender on the state's Megan's Law Web site.

He was charged and tried twice in the murder of two young girls aged 12 and 15 long after the fact. The first trial resulted in a hung jury. In the second trial the jury found him not guilty. This whole concept of raping or murdering young girls makes me think of two other cases.

Otis Garret was finally convicted of ordering the hit on the mother who testified against him when he was convicted of running a San Francisco prostitution ring for the Hells Angels. They murdered the mothers twin seven year old daughters at the same time to send the world a clear message as to what the Hells Angels really are.

The other case that comes to mind is that really old one that made the front page of the local news when Hells Angels were acquitted of raping two teenage girls a sheriff saw came running out of their midst naked and crying. That certainly isn't a t-shirt I'd be proud to support. In fact Robert Thompson was shot outside a bar in California after the acquittal.