Woman gunned down in Abbotsford 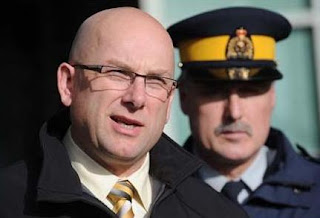 A 22 year old woman was gunned down on the side of the road in Abbotsford early Wednesday morning. The police believe the shooting was targeted and linked to the street-level drug trade.

“The community needs to be outraged by this, and young people have to begin to realize that this lifestyle is extremely dangerous, often leading to death. Certainly we can agree that nobody deserves this fate.” Cpl. Dale Carr

What outrages me, or what really confuses me is why the police will not confirm or deny rumors that her boyfriend was connected to the Red scorpions.

The Port Moody police department had no problems issuing public warnings about Dennis Karbovanec and the Bacon brothers. The Abbotsford police department has promised us a gang web site. Why would the police hush up the boyfriend's association? Just because it was a different department?

"When you have two people at a location, and one is alive and one is dead, you have to go in with a thought at least that maybe one person caught it and shouldn't have, and the other person was more the intended target," Abbotsford police department Const. Ian MacDonald said.

I don't understand why Cpl. Dale Carr of the Integrated Homicide Investigation Team is withholding information from the public. I sure hope he's not the one from IHIT that said everything was fine until they started cracking down on the Hells Angels. Whoever it was that said that from the IHIT is out to lunch and a security breach.

Who knows, maybe that was the one who had an affair with Karbovanec's ex girlfriend. After all, those guys trade girlfriends like hockey cards. She's the one who used to be with Jamie Bacon before she was with DK.