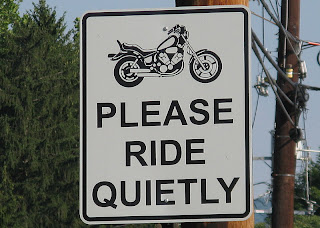 Someone posted a thread in the Kelowna Castanet discussion forum a while ago complaining about extra loud exhaust pipes on motorcycles. Seemingly it has become quite a problem there like everywhere else. Well the Vancouver Province recently ran a similar editorial entitled "It's time to silence a summer scourge."

Along with the editorial, the Province ran a cartoon of a biker blasting loud pipes with the caption of him yelling f off to everyone around him. That cartoon pretty much says it all. Loud pipes have nothing to with saving lives and everything to do with being obnoxious.

Driving fast along the shoulder of the road passing cars is another example. What if a car decides to make a right hand turn when that motorcycle is speeding past them on the right? It wouldn't be the bad driver's fault for not seeing that motorcycle because that motorcycle isn't where they are supposed to be.

Another person wrote in arguing in support of loud pipes comparing it to playing loud music claiming you can't ban everything that's fun. That person revealed the truth. It's not about saving lives it's about being obnoxious and having fun in so doing. It is similar to playing loud music at night oblivious to neighbours. That is rude. People who do that are as*holes.

Another reader said the police should target loud cars as well as not instead of loud motorcycles. Indeed they should. Gunning down a side road late at night in a residential area with loud exhausts is just plain offensive whether it be in a car or a motorcycle.

The fact that so many of these guys rush to excuse the noise is proof that it needs to be legislated. It's no different than the guy who argues it's his charter right to crank loud and offensive music anytime and anywhere they want.