A Place where blind men see 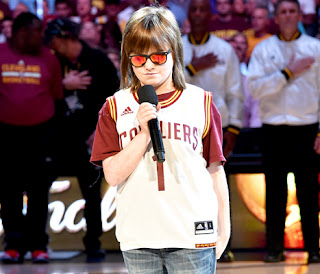 Well this is inspiring. Marlana VanHoose, a blind girl with cerebral palsy sang a breath taking rendition of the American National Anthem at Game 6 of the NBA finals. Golden State Warriors won by the way. They're me peeps so they are.

I like listening to different national anthems. Even though most are in different languages you can usually feel a sense of patriotism that each anthem kindles. Although I prefer the Canadian anthem because I am Canadian, I have a great respect for the American national anthem. I have a lot of friends who are American. To them the flag is a very sacred thing. They don't let it touch the ground. That's a big deal to them.