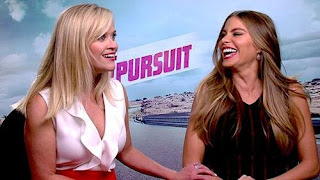 Stress levels have been a bit high of late so we went to see Reese Witherspoon and Sofia Vergara in Hot Pursuit. It was pretty funny. My daughter is a fan of Sofia Vergara because she's from Colombia. My daughter went to Colombia a couple of times and loved it. She talked about learning to Salsa dance at 3:00 AM on the side streets with some friends. She talked about how they poured aguardiente all over the bar, set it on fire and drank it through straws. Good times.

One time they were in the back of a cab and a guy on a motorcycle pulled up beside them with a gun. Her friends grabbed her head and pulled it down out of view as the cab raced in and out of traffic and pulled over beside a cop causing the high jacker to move on. She thought it was fun. It was hard for me to get mad because I had many similar experiences when I was her age.

Recently she said that she loves her new car but she really misses Columbia. She said the people there are dirt poor but they are really happy. I know exactly what she means. When I came back from Ireland all I wanted to do is go back. I just couldn't relate to the yuppie materialism that exists here. It was a lot different back in Ireland. I told her that I came to the conclusion that I'd be able to give my kids a better life if I stayed here. More opportunities and what not. Yet growing up poor has been good for them. They have a strong work ethic and are focused on positive things despite their insane father's antics. They're all grown up now. Life goes on.

I have to do something. I just don't see myself going back to church and helping out with the boy scouts again. Not when I know about all the horrible things going on around me. That's why I think TBM is the cause to support right now. They have a strong network of safe houses that aren't run by the government or the police. They run it themselves. Just like the safe houses the IRA would run back in Ireland. The same type of network except for a more positive cause. All former bikers and gang members. Not the plastic pretty boys we have out here that live in the ivory tower. Hard core soldiers who used to go over to Europe into Germany and blow shit up. These are the guys helping people leave the gang life and protect them.

I started watching a TV series on Netflics called Lilyhammer. It's about a mafioso in the States that was screwed over and went into witness protection. He asked to be assigned to Norway after seeing their winter Olympics because he figured no one would be looking for him there. It's pretty funny. TBM's network in Scandinavia is worth looking into. 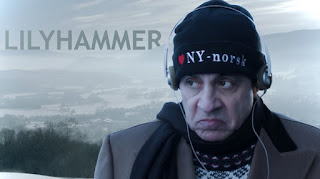 * Comments are still closed until we hear back from the court *