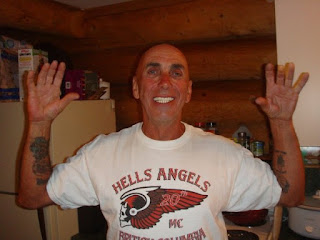 I checked the court registry in Vancouver while I was filing court documents today. Turns out that David Giles' voir dire is still on. That's a trial before a trial to determine what evidence will be admissible. That means I can't report what I saw and heard yet but I sure would like to. I'd sure like to be able to tell you all who was on the stand and who I saw the witness hanging out with during the break. I can't report on that until the whole thing is over with. All I can say is holy Manuel Noriega batman, sh*t is gonna hit the fan.

Skellator is not looking well and I'm not going to mock him any more because I understand he isn't well. I don't know if that's just another bullsh*t story or if it's real but I don't wish that on anyone. Not even my enemies. I attended the court in the afternoon session. Skelletor made a point of turning right around and looking me in the eye before turning around to face the front again. I was the only spectator in the court room. I guess it was only fitting for him to see my face in this life so he'll know what to look for when I testify against him in the life hereafter.

The key thing to remember is that he needs a fair trial. If he was guilty of this drug trafficking offense then he needs to be convicted of it not the trickle down scape goat. According to Neil Hall, who sat in on the EPandora trial, Giles was implicated in the Western Wind bust. That was huge - 2 1/2 tons of cocaine. Not pressing charges in that case was a judicial tragedy.

I must admit, since Giles is one of the only ones who hasn't made bail, he doesn't look quite as smug now as he did when he was standing beside Mom Boucher grabbing his balls telling the media to suck it after Boucher got off on a technicality. How the arrogant have fallen. 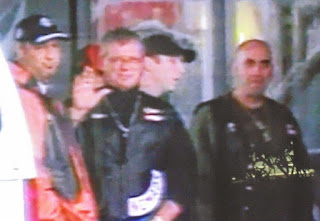