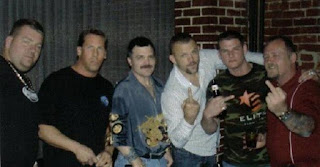 Well well well Len Pelletier has finally been named and busted for cocaine trafficking though the 856. The Vancouver Province is reporting that "Drug charges have been laid against two Langley men alleged to be senior members of the so-called 856 gang. The province’s anti-gang unit says 48-year-old Leonard Pelletier and 26-year-old Jason Wallace were among three men who were arrested last July. Pelletier has been charged with five counts of drug trafficking and one count of resisting or obstructing a peace officer."

The Langley Times is confirming that these charges are from a bust last year involving the 856. Aparently we were right when we said at the time that Len Peltier was involved. Does that mean we were also right when we said Larry Mizen was working for Len Peltier before they terminated his contract for bad press even though they knew fully well what he was doing at the time. Larry Mizen collected drug debts in Whalley for the Hells Angels. Larry and Lenny were not members of the Hells Angels but they used the name and reputation of the Hells Angels to do business. Everyone local knew that but were too afraid to say.

The Hells Angels hate Lenny because he is a weasel that flips on all his co accused. They have tolerated him for all these years because of his uncle and because he's been a money maker. Yet what they did to Janice Shore was deranged. History has recorded that.

Len Peltier's 856 drug trafficking network has reportedly extended from Langley to the Yukon and Yellowknife. Lenny is the guy with the stash beside Chuck Liddel in the top picture. He's the one that looks like he's from that /70's show. His uncle Bob Green, who is a Nomad, is on the far right. Lenny always does business in his uncle's name. He is a Hells Angels associate.

I should clarify that I did make a mistake last year when hearing news of the 856 bust. Originally the 856 were absolute nobodies. A couple of high-school kids in rural Aldergrove. Then Pelletier's son starts beaking off my dad this my uncle that. They were like f*ck your dad and shot at his suv while picking his son up from High School. That's when Lenny told the media that the 856 were no more. So we thought. Until Lenny and his son started a new group up of the same name.

Another reason I have beef with Lenny is because of what happened to Dru.