Hells Angels to be deemed a criminal organization in South Australia 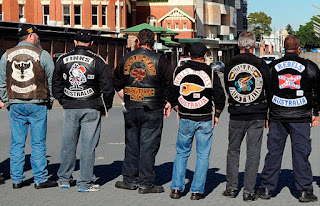 ABC Australia is reporting that the government of south Australia has proposed legislation that will officially declare the Hells Angels a criminal organization just like Manitoba has. In fact, they are adding 26 other outlaw motorcycle gangs to the list. This is the perfect example of how the Hells Angels are destroying it for everyone else.

The question we have to ask is how do we confront organized crime while at the same time protect civil liberty. It's pretty simple really. The freedom of association is a sacred right. The right to sell drugs is not. It's that simple. In Canada, Manitoba is the only province so far to have the Hells Angels deemed a criminal organization by law makers. In Ontario and Quebec it was the courts themselves not the actual lawmakers that made that conclusion.