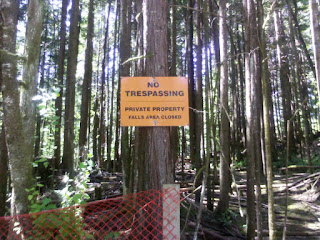 This is another example of denying public access to public land. The UBC Research forest in Maple Ridge are endowment lands donated to UBC as a gift. UBC is a publicly funded University. The research forest is open to the public but they have "closed" the waterfalls to the public. This is a beautiful spot on the Allouette River. I realize there has been problems in the past with youth drinking and cliff jumping yet denying public access completely is going over board. That's like putting up a fence around wreck beach and saying the public is not allowed in. It's just not right. 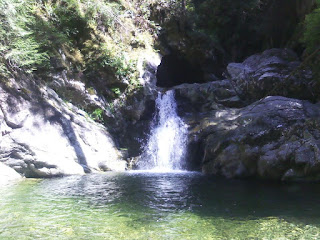 I hiked down and took this picture yesterday. The falls are several tiers and this is the last tier. You can wade into the water and go right up to the waterfalls. Obviously drinking and cliff jumping is a bad idea. I was born in North Vancouver near Lynn Canyon. A lot of people have died there doing stupid things but the park is beautiful and the 30 foot pool is totally safe.

Years ago when Cypress mountain became owned by an American company they tried to deny public access to certain parts of the park. People came out in huge numbers to protest and they rescinded the decision. Tax payers elect the politicians that make the rules. The rules have to be in the public interest. Denying public access to public land is a bad idea. Signs that say no drinking or no cliff jumping are good enough to deal with the liability issue.

In the States if you are caught trespassing you could be shot dead. Here you might get a ticket. I hope they do give me a ticket so I can dispute that ticket in court. If they are going to deny public access then the public need to reassess the University's public funding. Perhaps we can e-mail UBC and request them to amend the policy: reny.kahlon@ubc.ca, presidents.office@ubc.ca, arvind.gupta@ubc.ca, for.recep@ubc.ca