2020 Overview: A light in the darkness 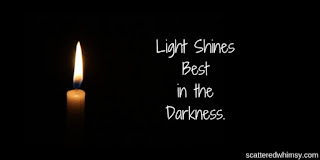 In 2020 our theme was clear vision and personal responsibility. This was the year that we own it and stop blaming everyone else for our choices. We compared the year 2020 with the term 20/20 vision and said this is a new era where we begin to see things more clearly.

For me I began to see the Lindsey Buziak murder much more clearly. It became clear that Chris Horsley's attack on Jeff Buziak put him in a conflict of interest. That became crystal clear to me.

The next thing that became crystal clear was the bias of the media. After Donald Trump was elected, the media's bizarre misrepresentation of everything he said and did became completely toxic. It became impossible to watch. As the Hodge twins said, he must have been doing something right for the media to attack and misrepresent him the way they did. Yet it didn't end there. The media's malicious misrepresentation of Covid became criminally insane.

I do not support QAnon. I think Q was a plant to lead the resistance astray. In fact, I don't care about Donald Trump. I care about civil liberty and fiscal responsibility. That is what I care about.

The good thing about Donald Trump was that he wasn't in bed with the CIA. The CIA are professional liars. Lying is their method of operation and drug trafficking is their primary method of fund raising. Gary Webb was right. Operation Fast and Furious showed us that Iran Contra never stopped. One thing that happened in 2020 was the rise of extremism and I'm not talking about the alt right. I'm talking about the alt left. In the struggle between good and evil, ANTIFA is on the wrong side. Fascism and Communism are the same thing. We need to passionately oppose both.

Fascism isn't a threat because everyone knows it is wrong. Communism is the threat because lying is their method of operation. Slavery is the end game of Communism and they will lie to everyone and anyone to accomplish that goal.

Another thing that happened in 2020 was the rise of patriots like Candice Owens with Blexit and Branda Straka with the #Walk Away movement. These are people that I do support.

The media's misrepresentation became Orwellian with thier coverage of Covid. It became impossible to watch. CBS lied and used footage of an over crowed hospital in Italy during the peak of their pandemic and claimed that was a hospital in Queens, Donald Trump's home town. They straight up lied and when they were caught they said it was an editing error.

This was CBS not CNN. Everyone knows CNN is straight up Fake news. Yet before that people thought CBS still had some credibility left. We were sadly mistaken. The problem with the Mainstream Media meltdown comes down to two things: Media mergers and the CCP.

Media mergers are bad because they make it easier to control the news. Change the ownership of the media outlet and you change the focus of the news. Now that the CCP owns Hollywood and the Western Media we can clearly see why the media has become so tainted.

The CCP's ownership of Facebook, YouTube and Twitter has shown us how absurd their censorship has become. Those platforms are now worthless as patriots flock to Rumble and Bitchute. Free speech still exists on the Internet but you have to seek it out to find it.

The fraud in the last US election is a threat to everyone who supports democracy. Dominion Voting is in a complete conflict of interest and we should not use them. Mail in ballots and electronic voting are threats to the integrity of an election. Physical ballots need to be kept and recorded so they can be recounted in times of discrepancies.

In Canada, Post Media News lied about the Covid ICU numbers in Edmonton. CBC lied about the Manitoba hospitalization rates. This represents a complete meltdown of their credibility. Most people realize Post Media News is worthless. Their bias is ridiculous. Yet they now own Global television and have stepped up their propoganda push on TV. Rebel News is the bright light.

Death rates reveal we've been had. The same number of seniors died this year as last year.

Canwest owned the National Post and the Global Television network. Post Media News bought Canwest. The National Post then published an article claiming that Chariman Mao did great things. That obscenity demonstrates the objectives of this Fake News Network.

Russia is not an immediate threat to America—China is.

Our media is in bed with China which is why they refuse to spell out the very real threat that China represents not just to America, but to all Western nations, and the world.

London is in another lockdown after an implausible 17 news strains of the coronavirus have been detected.
NYC and Los Angeles have been in some form of a lockdown virtually all year.
Meanwhile, in Wuhan...

Isn’t it incredible that two countries which stood up to globalism— the United Kingdom via BREXIT and the United States via Trump, are now the two countries being most impacted both economically and politically by a virus from China? https://t.co/KyC60son0Q