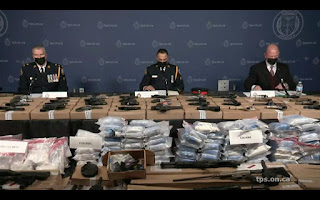 The Toronto Star is reporting that "A man in Etobicoke is facing 78 criminal charges after Toronto police recovered 65 firearms and drugs worth $18 million, in what police are calling the “biggest single-day drug and firearm seizure” in the force’s history. Police allege the guns, which included 57 hand guns and eight long guns, were meant to be used for street gang use."

"Among the drugs confiscated were 106 kg of cocaine, 61 kg of crystal meth, nine kg of MDMA and five kg of fentanyl." That is massive. It once again shows how completely useless and compromised the BC Gang Task Farce really is. They don't do this but all the other provinces do.

This is how law enforcement is supposed to work. The gangs start brazen shooting killing innocent bystanders and the police target their drug network and their illegal guns. It's a logical consequence of unacceptable behaviour. Taking guns away for law abiding citizens will do nothing to stop gun violence. This will. This is what they refuse to do in BC. Ask yourself why.