The Nova Scotia RCMP are reporting that Cameron Mombourquette and Dawid Denisow are jointly charged with Possession a Prohibited Weapon for a Purpose Dangerous to the Public Peace and with Transport a Prohibited Firearm in a Careless Manner" among various other firearm related offenses. It looks like this was the result of the dramatic December 9th police chase near Halifax. If we had the NS RCMP in Surrey, we wouldn't need a municipal police force.

Last month the Chronicle Herald reported that Terrence John Keeping was charged with possession of cocaine for the purpose of trafficking after 9 kilos were seized in his long haul truck. 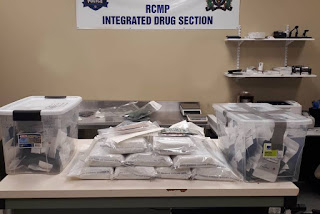 Posted by Dennis Watson at 6:47 AM