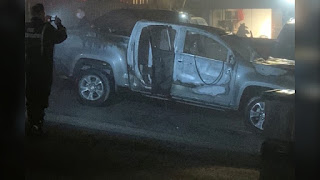 Vancouver is Awesome is reporting that "Police are investigating after a 19-year-old was shot to death in East Vancouver Friday night. The murder of Vancouver resident Amar Najat Jalal appears to be a targeted incident, the Vancouver Police Department (VPD) said in a news release issued Saturday afternoon, Dec. 12."

"Officers responded to the scene at East 5th Avenue and Cassiar Street after witnesses reported shots fired just after 8 p.m. on Dec. 11. First responders found the victim suffering from gunshot wounds in the middle of the intersection, police say. Vancouver Fire Rescue Services and paramedics' efforts to revive Jalal proved unsuccessful. Police say the 19-year-old was pronounced dead at the scene."

"Police also discovered a grey pick-up truck fully engulfed in flames in the north lane of East 5th Avenue, just around the corner from where the victim’s body was found. Preliminary evidence indicates this vehicle could be connected to the shooting.”