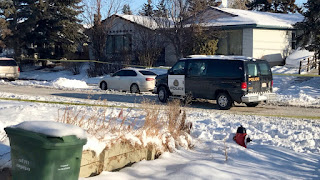 The Calgary Herald is reporting that "The Calgary police homicide unit is investigating after two men were found Tuesday morning shot to death in a running vehicle in the northeast community of Marlborough. Officers were called to the 1000 block of Marcombe Drive N.E. for reports of a suspicious vehicle that was left running on the street around 9:20 a.m. Police found two men dead inside."

"The deaths are believed to be targeted, police said in a news release Tuesday afternoon. Investigators believe the vehicle had been parked on the street since Monday evening and the two occupants were shot to death between 9 and 9:30 p.m."

Global is reporting that "Calgary police have identified the two young men found dead in a vehicle in the city’s northeast earlier this week. The bodies of Kuanyleit Kogalt and Garang Deng (Cody) Akoar, both 20 and from Calgary, were found in the vehicle by police officers just after 9:20 a.m. on Tuesday. Autopsies on the men were done on Wednesday and Thursday, and determined they both were shot to death."