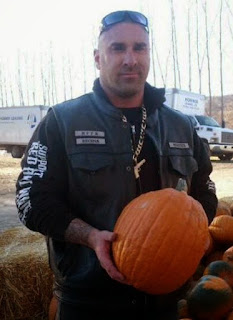 Trevor Dietz is back in the news. CBC is reporting that "Less than 48 hours after a judge sided with an abused wife in court — allowing her to live in the Calgary home she once shared with her husband, who is serving a prison sentence for brutally beating her — Molotov cocktails were thrown through the windows of the house, causing it to burn to the ground."

As I previously reported, Trevor Deitz was convicted in a BC Saskatchewan drug ring. The Regina Leader Post reported that "During their sentencing hearing at Regina Provincial Court in late July, court heard that Deitz would receive and distribute a large quantity of cocaine every week, and that Stettner was his lieutenant. During his sentencing, court heard that Deitz has had extensive involvement in the sale of cocaine in the past, and has a lengthy criminal record."

"He previously received a 30-month sentence after pleading guilty to possession of a controlled substance for the purpose of trafficking and possession of the proceeds of crime in 2006, and forfeited a Harley, a BMW, a house and nearly $90,000 in cash at that time. He and Stettner forfeited another $50,000 in cash and a number of high-end vehicles as part of their recent sentences." OK so he was a high level cocaine dealer.

I say Hells Angels associate because I can't see the back of his jacket. It's either a puppet club like the Dirty Flu or he is a full patch Hells Angel. Given the discrete nature of his online profiles and the lack of any puppet club info, I'd say he is full patch. He appears to be affiliated with the Hellside chapter which is Edmonton's new chapter that oversees the Brother's Keepers in Surrey and just capped Ali. Funny thing is, although he proudly wears a ACAB patch (All cops are bastards) his current Harley used to be a cop bike. That's kinda lame. 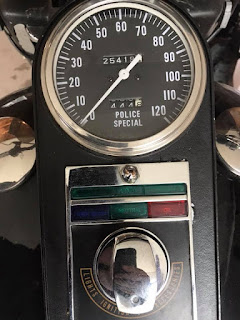 May 2020 the Calgary Herald reported that "Beating up his wife and threatening to kill her if she called police has landed a city man a two-year prison term on top of the time he’s already served. The prosecutor said Deitz became angry at Bourdon last Oct. 17, and during the course of a prolonged assault choked her unconscious, broke her wrist and repeatedly struck her in the face causing swelling. At one point during the attack Bourdon said she would call the police. 'The accused said he would kill her before the police arrived,' Ramakrishnan said."

OK that's some Dr Phil stuff going on there. Beating up girls is about as lame as it gets. Maybe that's why he rides a cop's bike. "After Deitz was arrested a search of the residence found a semi-automatic rifle and 23 clips of 10 rounds each for the gun in a separate location."

OK those would be illegal. A semiautomatic rifle in Canada has to be pinned at 5 rounds. Handguns can be 10 but semi-automatic rifles can't be any more than a five-round capacity. Hence none of those magazines are legally obtained. Just sayn.

Update. Hellside is Edmonton's third chapter not Calgary. That was a typo. I highly doubt Iron Man or Bullwinkle would have anything to do with this clown. That's why he lives in Calgary but works for Edmonton's new chapter. They farmed him out to the B team in the toolies.