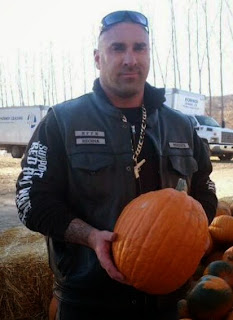 The Leader Post is reporting that "a massive bust targeting allegedly upper-level drug dealers in two organized crime groups in Regina has led to 12 arrests, 61 charges." 43.8 kilograms of marijuana and 1.7 kilos of cocaine were seized. "The investigation was aimed at two groups suspected of working several rungs above the street-level drug dealers and involved in moving drugs into the city." The police said the organized crime allegations don’t relate to an “identifiable group,” such as a street gang or outlaw motorcycle gang. Oh really?

One source claims Jonathan Joseph Yurkoski, the leader of this drug ring, is high up in the Heretics which is a Hells Angels puppet club in Saskatchewan. In the top picture you see him in his vest. On his right chest are two small patches that say HFFV (Heretics Forever Forever Heretics) and below it Regina. On his right sleeve it says Support Red and White which means the Hells Angels. You'll notice the subliminal advertizing around his neck. He's wearing a gaudy gold chain with a gun in the shape of an L. At least he's wearing it around his neck instead of the finger and thumb on the forehead but it pretty much means the same thing. 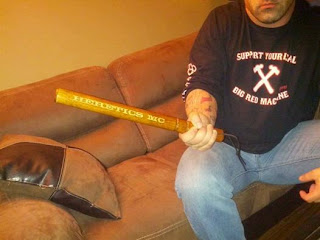 In this next picture of Yurkoski which was posted on his public facebook profile he is wearing a Hells Angels support shirt while holding a club in his hand that says Heretics MC. So why are the police so afraid to name the two criminal organizations in this case?

In 2010 Trevor Dietz and Chris Stettner were convicted in a BC Saskatchewan drug ring. Truong Nhat LE, who was charged with Yurkoski in this recent bust was charged back in 2005 for the same thing and plead guilty in 2007.

The Edmonton Journal reported that police arrested two men they say are members of an organized crime gang that are prominently involved in Edmonton’s cocaine trade. 1 kilo of cocaine and 8 kilograms of a cutting agent were seized. If the cutting agent was Levamisole, that stuff gives you flesh eating disease. Corey Huff, 26, and Jordan Murray, 24, face eight drug-related charges. Global is reporting that they have been connected to gang-related violence in the past and that the crime group also has ties to British Columbia. Go figure.

BC Local News is reporting that a police search of a Nanaimo home connected to an alleged attempted abduction turned up a large quantity of heroin, crystal methamphetamine, crack cocaine and powdered cocaine. Castanet is reporting that a 25-year-old woman and a 31-year-old man arrested in connection with the attempted abduction also face charges of possession for the purpose of trafficking. Previous drug busts in Nanaimo were tied to the Independent Soldiers who work for the Hells Angels.

Posted by Dennis Watson at 1:10 AM