The day the dream died - Update

Hepner takes the Surrey election. I'm going to throw up. The witch wears the ruby slippers. Crime was the primary issue in Surrey and she was the least capable of responding to it because she and Dianne Watts created the problem through their complete neglect. In Vancouver Robertson took a slight lead. We need to continue to oppose the Garbage Incinerator which would adversely effect the air quality for the entire Fraser Valley. The New York Model died today. Enforcement is off the table. The Hells Angels and the gang war won. This round. McCallum and LaPointe went out nobly like Butch Cassidy and the Sundance kid. It was a good dream so it was. As they say in Belfast, Chuckie ar la. Our day will come. Who's Bill Fordy dating now? Is it official? 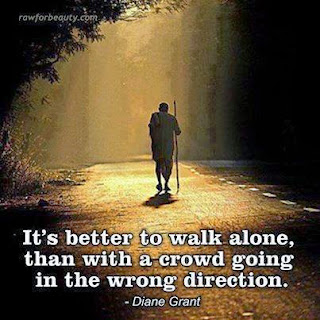 Looks like it's finally time to leave Surrey once and for all. When the people choose evil there is nothing anyone can do to help them not even God Himself. Surrey is no better than Toronto Ward 2. Just another toilet waiting to be flushed. 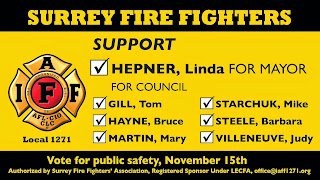 I will however, record my dissent. I did not vote for Surrey first and I do not support them. This bullsh*t flyer we received from the Surrey firefighters is the perfect example of everything that's wrong with Surrey's Ivory Tower city hall. The fire department are paid with tax dollars. Them promoting a candidate is a complete conflict of interest.

Do the Surrey Firefighters support the money laundering that went on in the Campbell Heights Industrial centre? I broke that story and the main stream media refused to run in. The majority of people that voted for Surrey Fist have no idea what they did in that dirty deal.

Surrey First's record for fiscal irresponsibility and criminal neglect has been the worst this city has ever seen. Thanks for nothing Surrey Firefighters. That was a dirty deal that did anything but keep Surrey safe. Shame on you.

In all fairness I really don't think Bill Fordy is malicious. He's just a complete idiot. He's not smart enough to be malicious. Richard Barszczewski, now he's malicious. Recently a blog reader was scoffing at the fact that the police referred to a 1.7 kilo cocaine bust as massive. It's somewhat ironic they would make a big deal patting themselves on the back for a 1.7 kilo bust when they could have had a two and a half ton bust but Richard Barszczewski intervened and prevented that from happening. If that's not malicious I don't know what is.

Bill Fordy's just brain dead. He's too preoccupied to worry about crime in Surrey. What's he too preoccupied with? Just ask everyone in his unit. Someone sent him a private invitation on his BlackBerry and it went to the whole group by mistake. None of these clowns are very bright. Fordy is one of Craig Callen's FOCCERS. The Surrey six trial showed us that there wasn't just one officer who had an inappropriate relationship with a witness. They all were getting drunk with witnesses and flirting with them. This huge climate of unprofessionalism is the reason why they have a class action sexual harassment suit.

This climate of unprofessionalism forces us to ask why the RCMP keep promoting idiots? It's as though they don't want them to be effective at addressing violent crime or the gang war. We need to find out who told Richard Barszczewski to pull the plug on the Western wind bust. I can tell you who it was but you won't believe me. Look into it yourself.