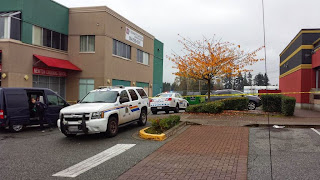 The Vancouver Province is confirming a Scan BC report that there was a double stabbing today at Wings on King George Hwy and 72nd Avenue in Newton. A man barged into the back door and stabbed two cooks. Bizarre.

A closer look at the article reads "Police said the man went into a restricted employees-only area, where he was confronted by two employees. When they tried to detain him, he picked up a knife and subsequently stabbed or slashed both employees prior to fleeing.” Evidently they were stabbed because they tried to restrain him. No explanation as to why he barged in the back door of the restaurant.

Just like that guy who randomly fatally stabbed a man in the neck after getting off a bus in Kelowna. Bizarre indeed. Scan BC is reporting that #Surrey #RCMP responding for a female freaking out in the backyard of a house after taking too much speed. Arrest the crack and meth dealers and you will prevent a huge amount of violent crime.

Update: Scan BC is also reporting that #Surrey #RCMP are on scene with a person shot at 70 Ave & 144 St. Searching for a vehicle that fled the scene.