The Maple Ridge News is reporting that two different women who engage in a "high risk lifestyle" were assaulted in Maple Ridge. Both victims said their male attacker was driving an older model white van. Similar to the one in East Vancouver that was dragging a sex trade worker behind it last year. That suspect looked a lot like Dave Pickton. The RCMP are also warning sex trade workers in Surrey after two women were allegedly assaulted by the same man. The suspect described as a Caucasian man, approximately 35-years-old, 5’10” tall, 200-230 pounds, with balding/shaved hair and crooked teeth. Similar to the East Van assault.

The Surrey RCMP is requesting the public’s assistance in locating a high risk missing female. Alice Susan BULLINGTON was last seen around noon on November 7th 2014 in the north part of Surrey. She has not been seen or heard from since. She looks like the same Alice Susan Bullington who was charged with manslaughter in the death of Raymond Robertson in the DTES.

MSN News is reporting that Justin James Hudson, 20, and a 17-year-old male have been charged with attempted murder, aggravated sexual assault and sexual assault with a weapon in the viscous attack on an Aboriginal teenager named Rinelle Harper in Winnipeg. The pair then assaulted a 23 year old woman with a baseball bat that same night. This is a picture of Justine Hudson. 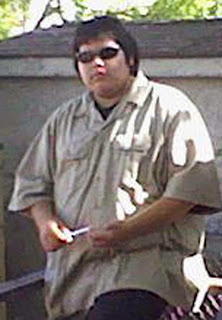 Posted by Dennis Watson at 1:08 AM