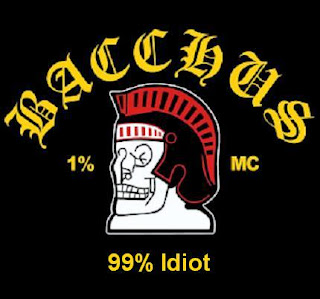 The Star.com is reporting that "The Red Devils of Hamilton folded on the weekend, along with their chapters in Sudbury and Chatham. All 31 of the former Ontario Red Devils now belong to the Maritime-based Bacchus Motorcycle club. That suddenly makes the Bacchus Canada’s largest outlaw motorcycle club, second only to the Hells Angels."

Are you kidding me?! Buttkiss? Why on earth would they patch over to Buttkiss, the patron Saints of homosexuality?! The Hamilton Spectator is reporting that Ray Philip is "a regular at The Donut Shop on Parkdale Avenue North, he nods a quick hello to one of the waitresses. When he speaks, his answers are direct and show little emotion." That's because he's a complete loser hanging out at a doughnut shop and now has to wear a condom on his nose when he kisses HA ass.

The patch over is likely because of the other Red Devils in Ottawa and Montreal that have the same name but a different logo. They're a Hells Angels puppet club as well. They get a newer clubhouse out of the deal. A small step up from the run down old barn they were in.

Bachuss told them they were 1%ers. They just didn't tell them which 1% they were. Sergius and Bacchus were two Roman soldiers who were openly Gay and secretly Christian. Members of the Bacchus MC passionately deny that's their Bacchus. They claim their Bacchus was the Greek god of wine. Only their logo is of a roman soldier not a Greek god so do the math folks. Who's in denial now? La Presse reported that the 5' 4" Walter Stadnick was from the Hamilton Red Devils. He joined Mommy Dearest's Nomads and became National President. Go figure.

Finger puppets to the Ontario Village Idiots. Some people just have no self respect.