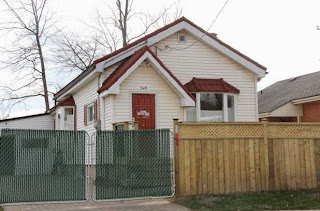 The Record.com is reporting that Frank Strauss, a Kitchener born member of the London Ontario Hells Angels has been sentenced to 11 years in prison. He was convicted of 17 offences — most involving gun and drug trafficking. The first search found 17 guns — handguns, rifles and shotguns — 4,500 rounds of ammunition, drug debt lists, marijuana and traces of cocaine but was thrown out because the polcie didn't get a search warrant.

However, a second search with a warrant found five handguns, three rifles, one shotgun, 9,873 rounds of ammo, gun scopes and tripods, 8.2 kilograms of cocaine, 53 kilograms of marijuana, 160 immature pot plants under grow lights, 106 grams of crystal meth, some meth pills and $30,000 in cash. Police also found 13 kilograms of a cocaine cutting agent, an 11-tonne press to create cocaine bricks, other drug-related devices, a money counter and body armour. All 26 guns found in the two searches were stolen from a Cambridge home. Strauss bought them from two Cambridge men who had stolen them. At the time of the searches, Strauss was on bail on drug trafficking charges in London. Lone wolf, my ass. They sell drugs as an organization.

Legal document shows nine of 12 full-patch London Hells Angels have criminal records. They reveal a dozen full-patch Hells Angels and three "hangarounds" with 105 criminal convictions between them, as well as a new support club called the Gatekeepers of at least four members, with 17 convictions between them. Nobody likes a liar. Especially from the Ontario Village Idiots.