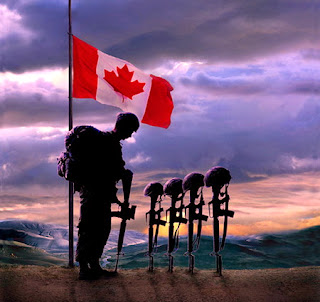 Last July was the 60th anniversary of the Korean War. Canadian soldiers dug in and helped repel the invading Communist army. South Korea remained a Democracy. North Korea did not.

Sunday was the 25th Anniversary of the fall of the Berlin wall. Google created a doodle to commemorate the event. In WWI and II we were so focused on the horrors of Fascism that we completely overlooked the atrocities of Communism. The Berlin Wall was a staunch reminder of that mistake. Once Berlin was divided, the wall was built and the machine guns turned inwards to prevent people from leaving. Last June was the 25th Anniversary of Tiananmen Square massacre. Now Hong Kong waits to see their fate as the world is distracted with yet another side show.

Although we remember with pride the sacrifices of WWI and II as well as in the Korean War we need to remember the many less than noble wars we were conned into supporting. The invasion of Iraq was based on a lie. They had no weapons of mass destruction. When that "mistake" was discovered (MI 6 were caught red handed giving false information to the media in Operation Mass Appeal) George Bush threw a party and said mission accomplished.

Afghanistan was much more subtle. We were under the impression that Afghanistan did 9/11. We were conned. The Bin Laden confession video didn't even look like Bin Laden. Prior to that invasion the Texas oil companies were wining and dining the Taliban (who were trained by the CIA to fight the Russian invasion of their country) trying to win the contract for a gas pipeline through Afghanistan called CentGas - Central Asia Gas Pipeline. UNICAL was supposed to get the contract. When the Taliban changed their mind and gave the contract to Bridas, an Argentina firm, Afghanistan was invaded and the contract was reversed.

US Troops began protecting the Opium fields. We were told they were doing it because if we didn't the Taliban would which was another bold faced lie. Right before Afghanistan was invaded, the Taliban had brought opium production to a grinding halt. After the invasion Afghanistan quickly returned to be the largest opium producers in the world. Julie Couillard claimed that Maxime Bernier told her “the war in Afghanistan has nothing to do with building democracy in that country but has to do with the global control of the opium trade. It’s a drug war.”

Libya was another example of fallen values. One minute Sarkozy was trying to convince the world to trust Gadaffi with nuclear weapons and the next minute we helped that dirty dog topple the "dictator" after Gadaffi decided not buy buy a reactor from France. That was not a noble mission.

Now we have Stephen Harper giving CSIS more power instead of charging them with murder in the Air India bombing as he tramples the Charter of Rights and hands Canadian sovereignty over to Communist China while he spends billions of tax dollars on jets that will not work in the Arctic and aren't for protecting Canada. They're for participating in the oil wars and for rewarding a company that has a long history of fraud and over billing that one of his candidates lobbied for. Boeing is Good - Lockheed Martin is Bad. This Remembrance Day we need to mourn the death of our values. Lest we forget, we used to have morals.