CBC lied about the Covid hospitalization rates in Manitoba just like Post Media News did in Edmonton. CBC said people were lined up to get in and being triaged in their cars. Rebel News went to check it out and that was a bold faced lie. There were more staff parked in the parking lot than patients. There are on average 5 Covid patients per hospital in Manitoba. That is not a crisis.

What we are seeing is a pattern of deliberate deception by the Mainstream media. When Covid was at its peak, the MSM in the United States claimed the hospitals in New York and California were overflowing and that people were lined up outside. Some absurd reports even claimed there were body bags in the street. Yet locals would film the exact same hospitals on their cameras empty with no line ups and no body bags. It wasn't an error. It was a deliberate deception.

The same thing happened in Australia. The MSM interviewed a doctor saying that the hospital staff were so overworked from Covid cases that they were fainting from fatigue from pulling double shifts. A local went down to drop off some donuts as a thank you to the health care workers and the hospital was literally empty. The staff said it was so dead they couldn't get shifts.

CBS went so far as to used video footage from an overcrowded hospital in Italy and claimed it was a hospital in New York, Donald Trump's home town. When it was proven the footage was actually from Italy, not New York, CBS claimed it was an editing error. It was no error because it was used to promote their other false reports of the hospitals in New York being overrun with Covid patients. They even used that exact same video footage from Italy and later claimed it was in Australia to support their false reports there. This pattern of deception displays malicious intent. 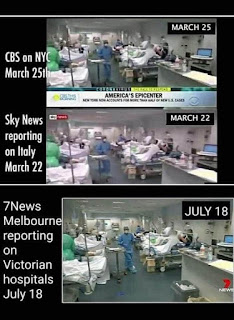