Bombmaker charged in 1988 Pan Am explosion 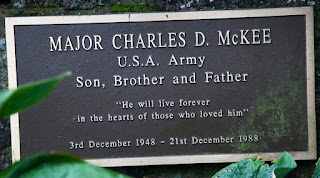 We might as well end 2020 with an epic case of fake news since 2020 has been full of it. The US Department of Justice is reporting that "Today, Attorney General William Barr, Director of the FBI, Christopher Wray, Assistant Attorney General for National Security John Demers, and Acting U.S. Attorney for the District of Columbia, Michael Sherwin, announced new charges against a former Libyan intelligence operative, Abu Agela Mas’ud Kheir Al-Marimi, aka, “Hasan Abu Ojalya Ibrahim” (Masud), for his role in building the bomb that killed 270 individuals in the destruction of Pan Am Flight 103 over Lockerbie, Scotland on Dec. 21, 1988." AYFKM?

Since they had the audacity to bring it up, let's revisit that horrific event. The US blamed Libya for an explosion on board flight Pan Am flight 103, over Lockerbie, Scotland. Major Charles McKee, of the Defence Intelligence Agency was murdered on that flight. He was on his way home with a briefcase full of evidence of the CIAs drug trafficking in Lebanon. The Defence Intelligence Agency had conducted an investigation into the CIA's drug trafficking in Lebanon and Major Charles McKee was on his way home to testify about that crime.

Gaddafi had no motive to murder Major Charles McKee and prevent him from testifying. The only one that had a motive to prevent him from testifying was the CIA, the ones he was going to testify against. After Major Charles McKee was murdered, what happened to the charges against the CIA? Nothing. Operation Fast and Furious​ showed us that Iran Contra never stopped.