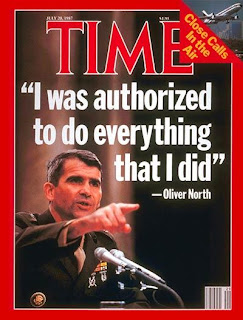 Since Iran contra keeps coming up and since it’s the basis of the Gary Webb story, I think it’ll be helpful if we very briefly clarify just what Iran contra is for everyone who just tuned in. We all remember Oliver North being on trial for something. The official story was that the CIA was selling Iran arms to get them to release the American hostages but that’s not what it was really about.

It was about selling Iran arms to raise money to fund the contra rebels in Nicaragua. That is what it was about. It had nothing to do with freeing hostages. Unfortunately, that’s not all they did to raise money for the contras. The Gary Webb story confirms they traded arms for cocaine and were responsible for the US crack epidemic in the 1980’s. Brian Mulroney was tied to Iran contra through Trans World Armaments in Quebec and Richard Secord.

Al Martin spelled it out in his book The Conspirators how they also used straight up investment fraud to raise money for Ian contra. I confirmed this in a interview with someone back east who told me exactly how Earl Brian embezzled $50 million for the CIA from Nesbitt Thompson’s clients and went to jail for fraud. Ari Ben-Menashe claims he met Brian several times in Iran contra and that Brian accompanied Robert C. “Bud” McFarlane to Tehran in late February 1980.

So Iran contra was a huge arms dealing drug trafficking organization Oliver North and the CIA were in charge of. Funny thing is, after Iran contra, Oliver North becomes a Fox TV news host and is spewing CIA propaganda on the air. This guy was an arms dealing drug trafficker. Now he’s a Fox TV News host giving us everything the CIA want us to know or at least want us to believe. Just like how Anderson Cooper worked two summers as an intern for the CIA is now a journalist for CNN. Big brother is clearly controlling the media we watch. Back in the day that was called propaganda. Operation Mockingbird is alive and well.