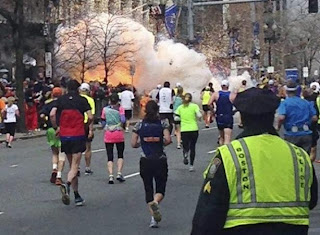 I think we are all in shock over the news of two bombs going off at the Boston Marathon yesterday. The Boston Marathon is a world famous nonviolent event. How anyone could mar that with such and act of random violence is very difficult to comprehend. Just as difficult to understand as someone walking into a school or a movie theater and shooting innocent civilians. Incomprehensible.

Acts of terror, as revolting as they may be, supply us with a motive. Someone is angry about some foreign policy and takes out revenge on innocent civilians. Yet the timing of this horrible event is baffling. There is no current aggressive military action. The US have pulled out of Iraq, things are winding down in Afghanistan. Any enemy of the United States knows very well that any kind of terrorist attack on innocent civilians on American soil would outrage the world and result is a swift retaliation. Everyone knows that. So why do it?

I know I’m not the only one thinking it and as treasonous as it may sound, the real treason is to bury our head in the sand and refuse to consider all options. Including the possibility that our greatest enemy currently in the one from within.

I know many will start to scream in a hysteric frenzy at this point. Let them scream. No one can deny the existence of Operation Northwoods and our failure to examine that text today is treason. The plan, as submitted by the Director of the CIA and signed by the Joint Chiefs of Staff, was a plan to kill American civilians on American soil and blame it on Cuba to gain public support to invade Cuba during the Cuban missile crisis.

The Gary Webb story is real. The drug trafficking the Agency did out of Mena Arkansas though Barry Seal and Chip Tatum was repeated in Operation Fast and Furious. As heart wrenching as the thought is, it’s something we have to face. If the Agency is capable of trafficking drugs, what else is it capable of? If they planned to kill innocent civilians to gain public support for a military action once, could they ever conceivably consider it again?

Michael Moore was astounded that the senators that voted on the Patriot Act hadn’t even read it. One Senator explained to him that they don’t read most of the bills they vote on. Yet the National Defense Authorization Act that was passed under Obama’s watch is even worse. It gave the military power to set up checkpoints and search civilians at will and arrest them with out charge, trial or legal representation as long as they deemed the person to be a domestic terrorist. At the same time England classified everyone in the occupy movement as a domestic terrorist. This act of treason is a violation of the US Constitution and the Bill of rights.

That’s the point. The Constitution now hangs by a thread. The greatest enemy there is at this time who is eroding and violating the US Constitution is this enemy from within. The Karachi affair. 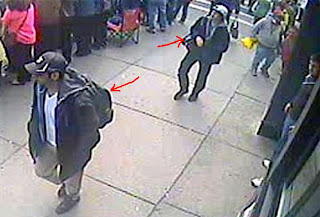 The FBI have released photos of two suspects in the Boston Marathon bombing. How on earth is a kitchen pressure cooker packed with explosives and nails going to fit in either of these two bags?

Obama fooled us. He hasn’t closed Guantanamo bay. The US troops are protecting opium fields in Afghanistan. Operation Fast and Furious happened under his watch. Guess who paid for Obama’s education? After graduating from Columbia University, Obama worked for a CIA front company called Business International Corporation (BIC). Sibel Edmons sums it up well in her boiling frogs blog.