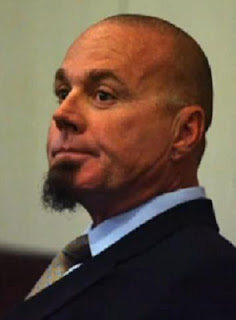 James Bradley, of Temecula, California is a general contractor and member of the Hells Angels. He was was found guilty of uttering threats in a contracting dispute on Oct. 18 2012. However, his sentencing on Jan 2013 was postponed because his wife has disappeared.

In court, defense attorneys Christopher Hammatt and Andrew Linehan said that Deanna Bradley hasn’t been seen or heard from since Tuesday and might have committed suicide. They said James Bradley was at a restaurant with their children Tuesday evening when Deanna Bradley left their home near Temecula without her purse. James Bradley has been searching for her ever since. He has no idea where she’s gone,” Hammatt said.

Turns out he just got 4 years probation.

Turns out the wife is fine. She was just upset over marital issues.