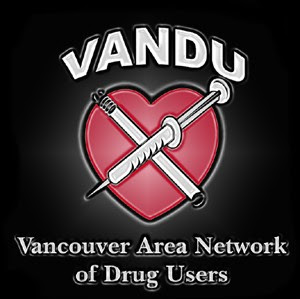 The other day the Vancouver Province reported that Vandu, the Vancouver Drug Users Association, was receiving special treatment from City Hall and skipped the requirement to get a building permit. Let me be clear. Vandu has absolutely nothing do do with harm reduction. Their mandate is to promote drug abuse and feed the gang war by creating more addicts.

Harm reduction has failed and it has absolutely nothing to do with the promotion of heath. It does the opposite. It uses tax dollars to help people poison themselves and commit suicide. Harm reduction didn’t save Ashley Machiskinic. Buying addicts free drugs with tax dollars is not the answer either. We might as well cut a cheque directly to the Hells Angels. Oh but wait City Hall already did that.

City Hall bought the Drake hotel from the Hells Angels for social housing and gave them $2 million more than it was worth. How does that relate to Mayor Gregor Robertson's foster son's firearm and cocaine charges? Who was he selling cocaine for? You ask why I write about the Hells Angels control of the drug trade? You ask why I write about corruption in politics? This is why. They are using tax dollars to support gang related violence and organized crime.