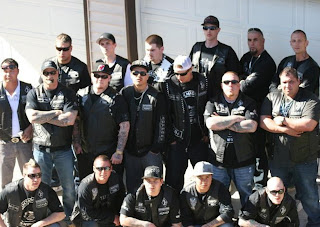 John Adam Curwin, 31, plead guilty on Wednesday to several charges of gun and drug trafficking and received a 9 and 1/2 year sentence. He’s the first to plead in that recent RM sting in Winnipeg called Project Dilemma. Curwin was selling BZP and was caught with a stick of dynamite.

The Winnipeg Sun is reporting that police found out that two members of a RM Support club from Ontario called the SS Elite came to town to help them get established. They found out this information at an RM meeting in the police informant’s home who was a full patch RM member. I have a tip as to his name but it hasn’t been released in court documents and I do support protecting the identity of people who testify against drug dealers.

Court documents claim the SS Elite was described by RM leaders as being modeled after the SS Waffen, “created to protect Hitler and other Nazis. As SS Elite members, they ultimately report to RM members in Montreal but are also required to protect and support the local chapter members.”

OK I am getting pretty fed up with all these freaking Nazis. This isn’t just a trendy logo. It’s pissing on our flag and the graves of all the noble soldiers in Bény-sur-Mer. Pick a different name and a different symbol. That one is shameful. It mocks the French as well since our soldiers died liberating France from Hitler’s Nazis in Normandy.

While we’re on the subject of the Rock Machine in Winnipeg, the top picture is a family photo of the crew from the summer of 2011. You can see Jay Strachan on the left in the middle row. He was the national Nomads president. I’m not sure if he’s still in.

The two on the right in the middle row is Stephen King and Stephen Cabral. Cabral was the Winnipeg President. Bottom right is Adam Curwin who just received the 9 and ½ year sentence. Bottom left is Jean Paul Beaumont. He used to be with the Zig Zag crew like Jay Strachan was but became the RM Nomads Sergeant at Arms. He died in Brandon jail last fall. At least they ride nice bikes. No fat ass fairings and plastic saddlebags that look like Goldwings. I think on the West coast we do need fenders for all the rain though. 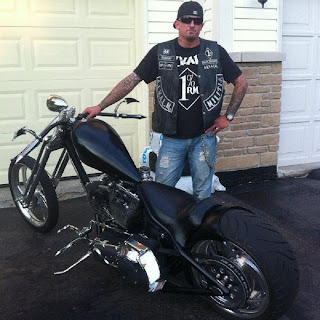