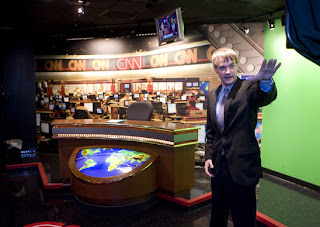 All this brings us back to Michael Riconosciuto. The RCMP did an investigation of that case and the frustrated investigating officers’ conclusion was that they weren’t allowed to tell the public what they found. It was classified. I can tell you this, if Michael Riconosciuto was guilty and the allegations he made about the CIA were false, the RCMP wouldn’t hesitate saying so. That information wouldn’t be classified as it would support the official version. The only thing that would be classified is if Michael was telling the truth. Yet keeping an unlawful secret is unlawful.

The other thing we need to look at is the agency’s control of the media. Operation Northwoods isn’t all Allan Dulles was famous for. He was also involved with Operation Mockingbird. This was a CIA campaign to influence the media in the /50’s and continues to this day. It involved recruiting leading American journalists into a network to help present the CIA's views. Following the shell company model, Operation Mockingbird was a maze of CIA front magazines and cultural groups. They ran leftist papers and attempted to infiltrate leftist organizations.

Which of course brings us to the Obama deception. After graduating from Columbia University, Obama worked for a CIA front company called Business International Corporation (BIC). BIC was a CIA front company that used journalists as non-official cover (NOC) agents around the world. This is crossing the line. Using a journalist as a CIA assets puts all journalists’ safety at risk. It also undermines the credibility of the freedom of the press. It is frighteningly familiar to big brothers control of the media.

We know someone sent the press release about the third tower falling too soon. BBC reported it falling before it fell. After a huge public outcry BBC said just because they reported the third tower falling before it fell doesn’t mean they were in on the conspiracy. It just meant they made a mistake. Saying something happened when it didn’t happen, that’s a mistake. Reporting a bank robbery before it happened isn’t a mistake, it’s a security breach.

More recently, Anderson Cooper of CNN has been accused of working for the CIA. During college, Cooper spent two summers as an intern at the Central Intelligence Agency. Many find Anderson Cooper’s use of a green screen in the Sandy Hook funeral interview questionable. Weathermen use green screens to show the weather. Movies use green screens to add special effects. In some ways many of our modern news reports seem like a fictional movie made by big brother.

Jesse Ventura brought up a good point. When he was elected Governor of Minnesota he was interrogated by the CIA. They wanted to know how he pulled off the election. Then he had a question for them. The CIA doesn’t have jurisdiction in the United States. That’s the FBI. What are they doing asking him questions on American soil? Indeed. What are they doing controlling the American media as well? That would overstep their mandate.