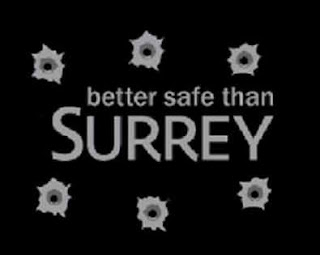 People were talking about a targeted shooting today in Surrey near 108 and King George Boulevard that was reported on twitter. A man was shot in the leg. The Province is reporting the police already have two suspects in custody. Normally we don’t even hear about shootings here if there isn’t a fatality. Lots of people seem to subscribe to scan BC on twitter.

The Surrey Leader has a video clip of the scene.

This is the second recent shooting in Surrey where someone was shot in the legs. As one blog reader pointed out, you have to wonder where in the legs they were shot. Kneecapping was a very common form of discipline in Belfast back in the day. Shooting someone in the knee would constitute shooting them in the legs. It would be worth finding out if this is indeed the case.