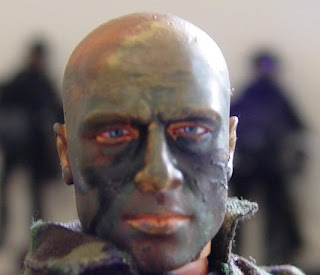 The Vancouver Province is reporting that a Boston-style police lockdown closed a Prince George neighbourhood yesterday, trapping residents inside their homes while RCMP pursued a suspect considered "armed and dangerous." Police said it was done for public safety reasons.

“Several residences were evacuated, the area was blocked off and residents were prevented from returning to their properties. Those already inside were asked to stay there. Deanna Holman, trapped inside the cordoned-off area, had a bird's-eye view from the house she was visiting. She saw camouflaged officers in ‘battle gear’ and green-painted faces lying hidden under trees. ‘Police were all over the place,’ she said.”

That is insane. Prince George is a pretty small town. Overkill is an understatement. The suspect faces charges of uttering threats, pointing a firearm and possession of a prohibited weapon, all as a result of an incident on April 3. Lockdown for that? Fatigues and face paint? These guys have completely lost it. They brought in SWAT and or the military three weeks later and all of a sudden it’s an urgent matter of public safety? I think not.

I remember what it was like living in a neigbourhood in West Belfast where the army regularly patrolled. I remember on one occasion a very young girl was outside her home in the early evening talking to a few friends. An army patrol saunters by and this little girl wearing bunny slippers walks up to one of the soldiers grabs a hold of his weapon sideways, looks him in the eye and says wash your face. He too was wearing face paint.

Prince George is not West Belfast. The Vancouver Province also reported that civil libertarians said personal rights issues were raised. No kidding. A few months ago I was driving home after picking my daughter up from work late at night. There were abandoned police cars at the intersection beside where I live which looked like they were warning people of black ice so I slowly drove around and proceeded home.

Several police officers ran up to my car in a complete panic slammed on my hood and started ordering me around. I responded by shouting out this is Canada not Russia. We have the Charter of Rights. One guy in particular was in a complete panic. I was furious. I told them I live here. Finally a female officer who had some composure said there is a police incident and asked me to wait around the corner which I did. They arrest the guy and left, then the female officer said I may proceed home.

Turns out it was just two guys who got in an argument and someone mentioned the gun word. We saw the guy getting cuffed. I thought to myself, I know that guy. Let me talk to him. These police officers running around in a complete panic is embarrassing. It’s very unprofessional. The police are supposed to serve and protect. I think many of them forget that. Part of it is pride, power and ego but part of it is just total fear of dealing with a gun call. If that’s the case, somebody needs a career change. Running around like terrified Gestapo ordering people around just isn’t acceptable.