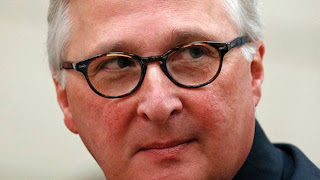 Well this is going from bad to worse. Don’t get me wrong. Fonberg was a traitor but at least he didn’t wear ladies underwear. My concern is putting someone from CSIS in charge of National Defence. It’s hard to take CSIS seriously at first. It wasn’t until 2004 that they finally got rid of their buck tooth beaver in a trench coat logo. I kid you not.

However, today’s article in the Vancouver Province is reporting that Deborah Grey will sit as a member of the Security Intelligence Review Committee (SIRC), which oversees CSIS. Well that’s somewhat ironic. We remember that tall tale. Arthur Porter was the chair of that committee.

November 2001 Arthur Porter stepped down as Canada's spy watchdog. April 2013 a warrant was issued for his arrest. April 2012 The Harper government tried to do away with the office that oversees CSIS. A move critics said opens the door to abuses of power by CSIS. The abuse of power, imagine that. They do say power corrupts.

Let’s roll back the reel here. Arthur Porter resigned as Canada's spy watchdog after his financial involvement with a controversial lobbyist named Ari Ben-Menashe based in Montreal came to light.

Ben-Menashe was a former “Israeli government employee”. He was arrested in the United States in 1989 by the FBI and charged with illegally attempting to sell three military transport airplanes to Iran. He went to trial and was acquitted in 1990; a jury believed his account, that he had simply acted on orders from his government in Israel to attempt the aircraft sale. He claimed it was part of Iran contra when the CIA was selling Iran arms not to release hostages but to fund the contra rebels in Nicaragua.

Ben-Menashe wrote a book called Profits of War: Inside the Secret U.S.- Israeli Arms Network. It talks about his involvement in Iran contra. Ben-Menashe is an Iranian-born Israeli businessman who worked for Israeli and US intelligence during Iran contra. Interesting indeed. So here he’s still doing questionable financial transactions with the head of the committee that oversees CSIS who along with SNC-Lavalin senior executives is arrested for fraud. Insert I told ya so here. Let’s not forget that Gwyn Morgan got SNC-Lavalin the contract to build the Evergreen Skytrain line in Vancouver.

So here we have the watchdog of CSIS charged with fraud who was doing business with a professed arms dealer from Iran contra. Does it get any dirtier than that? This is why I keep saying CSIS has a zero security clearance. Everything they know goes directly to the CIA’s drug trafficking network.

So now we’re gonna put someone up to his eyeballs in CIA drug trafficking in charge of National Defence. What’s he gonna do, oversea the military’s involvement with the opium production in Afghanistan? I just have to shake my head and walk away. These are the people that want to be able to spy on citizens without a warrant and arrest people without a charge. Buyer Beware. Military Intelligence has sure changed since a Man called Intreprid.