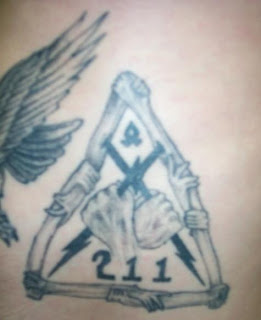 Speaking of Nazi white supremacists north of the border, they’re making news south of the border as well. A double funeral took place Friday morning in Texas for Kaufman County District Attorney Mike McLelland and his wife Cynthia. Both were gunned down in late March in what is seen an orchestrated attack on law enforcement. They were found shot to death in their home two months after one of his assistants was gunned down near their office.

21 March 2013 Montague County Sheriff's Deputy James Boyd was shot at by Evan Spencer Ebel. Hours later Ebel was shot dead in a police shoot out. The gun Ebel used in the March 21 shootout was the same one used to shoot and kill prisons chief Tom Clements two days earlier. Evan Ebel is with the 211 Crew of the Aryan Nations prison gang. The 211 Crew is from Colorado and is named after the Cal­i­for­nia penal code for rob­bery. Two other members of that gang are persons of interest in one of the shootings. One of those two suspects has just been arrested.

Freddy posted a link to the Aryan Brotherhood’s connection to this mayhem in the forum. I’m just trying to sort through things and connect the dots.