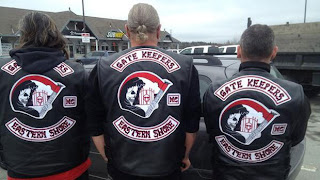 Locals seem to think the Hells Angels are unhappy with Bacchus and want to push them off to the side so to speak. Not surprising since they have made a lot of really stupid decisions lately and got a lot of bad press. Locals are concerned something is going to go down at a Hells Angels party this Friday where the Gatekeepers and Bacchus will both attend along with the Darksiders. Since everyone knows about it I doubt they’ll pull another Lennoxville massacre. The fact is they’re all attending a Hells Angel party together. That would mean they’re all celebrating their puppethood.

I don’t want to be mean but I’m really getting sick of looking at all these idiots let alone write about them. Three new stooges posing with their prized patch. Grown men still acting like kids. What is with this perpetual mid life crisis? Everyone forgot somewhere along the way they were supposed to grow up? Get married, have kids, contribute to society. They got married and had kids. They just forgot to grow up and contribute to society.

The other day I saw a guy in the mall with a Support White Rock 81 shirt that had a big 666 in the middle. Grow up people. This wasn’t a teenager wearing an Iron Maiden shirt, it was a grown man wearing a shirt that said look at me I’m a complete idiot. Supporting drug dealers who murder rival drug dealers and torture addicts for drug debts is bad enough but 666? Come on. Sure in some cases it means Filthy Few Fellowship like Otis Garret the baby killer and the freak from Haney who is his own brother killer just for the almighty dollar. Yet this was a support shirt so I doubt he had a filthy few patch.

Vincent Price and Iron Maiden knew what 666 symbolized. The father of all lies and all things corrupt - murder and mayhem. Stupid alright. Lawlessness means people can steal from and shoot you just like you do to everyone else. It’s hard to understand how someone can be so stupid and actually brag about it. It’s astounding.

Update: No word on Bacchus getting their butts kicked at the Hells Angels meeting yet. Perhaps it’s just simply another name change since Bacchus has criminal organization charges in the works. That way if the police seize Bacchus clubhouses the Hells Angels can still run Gate Keeper clubhouses. Until they get caught committing criminal acts for the Hells Angels as well. David Bishop was just sentenced for drug trafficking in Halifax prison.