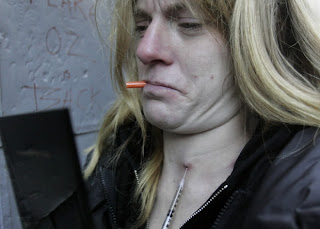 I know I shouldn’t say I told ya so but I did. Freddy recently announced that he knows a guy getting free heroin from the Vancouver not so safe injection site. He then posts a link to a CBC article confirming the “pilot” project back in 2005. This is insane. Any medical doctor that prescribes heroin should lose his medical license. Giving people rat poison is not in their best interest. Are we going to buy people free aftershave to drink? This program does exactly that.

Right from the get go my whole concern with this unsafe injection site was the give an inch take a mile extremism that permeates these crazed lobbyists. Some want to turn the safe injection site into a safe inhalation site where they can smoke crack at the taxpayers’ expense. That is absurd.

People can argue that addicts will shoot up regardless so giving them a safe place to shoot up is better than having them shoot up in the alley. Wrong. Their numbers proves their plan failed. They want to build more unsafe injection sites. That means they are increasing the number of addicts not decreasing them.

People argue about the methadone program. Yet there are obvious flaws within that program. Increasing the dosages instead of decreasing the dosages is the primary ongoing concern. This program has become a cash cow for doctors and pharmacists alike. Any medical doctor claiming the program is an essential service is in a conflict of interest because they are making money off the program.

People claim the unsafe injection site saves lives. Wrong. It destroys lives. Out of 300 addicts it creates, they might save 12 from overdosing. They then claim they just saved 12 lives when in realty they just destroyed 300. Heroin is poison. It kills people slowly and destroys their brain.

The DTES is the epicenter of the Vancouver gang war and the unsafe injection site has become the root of the problem in the DTES. Using tax dollars to buy heroin is wrong. It is illegal and opens the floodgates to an absurd flurry of contradictions.

To start, if you are going to buy heroin with tax dollars to give to an addict, then who are you going to buy it from? You can’t grow it yourself so you are going to have to buy it from a drug dealer. So right there you not only committed an illegal act, you also used tax dollars to fund and support the biggest predator in East Vancouver that is preying on and exploiting the poor and mentally challenged. You are funding and fueling the gang war which is fighting over those profits. You are fueling the acceptance and tolerance of the drug dealers who torture and kill people for drug debts.

Once you buy heroin from a drug dealer for your tax funded perpetual pilot project, you can’t really turn around and arrest them for selling heroin. So you now create a tolerance area that is in violation with the law. This is the existing problem with needle exchanges and unsafe injection sites. As soon as you start handing out free needles you then let drug dealers sell drugs next door. This is a violation of the four pillars program. Needle exchanges are supposed to be exchanges. You hand in a used needle and get a new needle in return. Now they just hand them out like candy so the original problem of used needles turning up in schools, public places and on private property has increased exponentially.

At the Vancouver Occupy site a young girl died from a heroin over dose. Thankfully she was given a clean needle to kill herself with paid for with tax dollars. I realize the cost of needles is insignificant. Yet there are two concerns. One is the fact that the more needles we hand out, the more used needles get discarded in public. The other concern is that it sends the wrong message. Many of the people who have drug addictions are mentally challenged. The ones we kicked out of mental institutions we closed down to give Gordon Campbell and his cronies two big pay raises and a gold plated pension. Giving anyone especially someone who is mentally challenged a free needle or free crack pipe gives the impression that using it is OK. Well it must be OK, a “nurse” just gave it to me. This is the wrong message for us to give.

There are a huge number of problems this program has created. We have seen the results of this test. It has failed. There are more drug addicts on the street now than ever. If you want to see the Zombie Apocalypse, just walk down Main and Hastings on welfare night. These are human beings that we are turning into Zombies. What we are doing is wrong and it’s about time we woke up and took responsibility. This program is not the four pillars. This program is not the New York Model. I saw the New York Model. I saw it succeed. If we really care about these people we will give them homes not drugs and we will stop the cruel predators that are profiting from this nightmare.