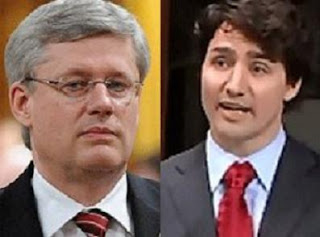 The Vancouver Province is reporting on the results of two very interesting and significant polls. The first one reveals two-thirds of Canadians believe Prime Minister Stephen Harper's Conservative government is too secretive and has failed to govern with high ethical standards. Although it comes as no big surprise this news doesn’t bring me great joy.

Yes there are many things that Harper has done that I totally oppose. I am very disappointed with what he has done to the party. He has turned Reform full circle into Mulroneyism. The exact plague Reform set out to fix. The poll found that 63% disagreed with the statement the "Harper Conservatives are living up to the promise they made when first elected in 2006 to provide an ethical, open and transparent government." Again this is no big surprise. Harper has not been ethical or transparent. Period.

Fifty-eight per cent of Canadians disapprove of the Conservative government under Harper's leadership. This isn’t a big surprise either when you have more than one political party on the ballot. That’s how a party can get a majority government with less than 50% of the vote.

So where does this lead us? The article and the second poll points directly to Justin Trudeau. The Vancouver Province claims Canadian voters would flock back to the federal Liberals if an election occurred now with Justin Trudeau as party leader.

Trudeau is the top choice among voters to be prime minister, surpassing the Conservatives' Stephen Harper and Tom Mulcair of the NDP. Yet when you look at the numbers it’s still pretty close. Thirty-two per cent of decided voters would support the Liberals if led by Trudeau - up six points from last November and 14 points since last June. While 31 per cent would vote for the Conservatives, down three points since November 2012.

Again this is promising but I have mixed feelings. What do Trudeau’s liberals feel about Insite and using tax dollars to buy addicts heroin? That really concerns me. Harm reduction is only one of the four pillars and there is a huge amount of pressure to forget all the other pillars but one which has sent us straight down the DTES toilet.

It’s possible Justin can see the folly in that decision. I’m not sure if the NDP can. I don’t know what their stand on that issue is but for me personally, that’s a pretty important issue when we want to talk about fiscal responsibility as well as addressing the gang war.

A lot of Harper supporters revel in bitterness over Justin’s father. They say he was a Commie that destroyed the country. Yet he had class and dignity. He represented us well in the world. Harper doesn’t. He doesn’t have class or dignity and he doesn’t represent us very well in the world.

Yes Pierre liked Russian literature. No doubt he did have some socialist ideals. Yet his crowning achievement was the Charter of Rights. He was the one that protected us from the intrusive nature of big brother. Protection from arbitrary arrest and unnecessary searches and seizures as well as the right to a fair trial are founding principles in the US constitution. No one would dare call the founding fathers Commies.

Harper has done everything in his power to erode the Charter of Rights and empower big brother. The only reason Harper backed off his warrantless surveillance was because the Supreme Court ruled that cell phones and text messages are protected under the Charter and the police need a search warrant to gain access to them. We have Pierre to thank for that. Getting a search warrant isn’t that difficult. Giving up our liberty just isn’t worth it.

They say Pierre started us down the road of out of control national debt. Yet Harper was far worse with his insider trading jets and the giant bank bail out he still denies happened. Harper sells Candu reactors to China who supports North Korea. The onlything holding back that lunatic in North Korean from following through with his threat to use nuclear arms on America is the fact that his technology isn’t there yet. Harper is helping him get there.

Harper has also given Communist China our oil rights so we are now funding their military expansion. When push comes to shove, Harper has been a far worse Commie that Pierre. Pierre protected us. Harper railroaded us.

How would Justin do in choosing judges? He can’t do any worse than Harper who promoted a lawyer that represented the Hells Angels to the bench because he was the president of the conservative party. Hopefully he will do better than Paul Martin who’s dying act as Prime Minister was to give us Peter Leask. That crazy decision has plagued us for years to come.

So yes I think the news is promising but I have mixed feelings. The only thing that will stop Harper is to elect someone else. That is the only way the party will pick someone else. Will Justin destroy the country in the mean time? I don’t think so. I think he will do us proud. Time will tell. It always does.

Harpers latest act of defiance is to cut soldiers serving in Afghanistan pay by $500 a month mid stream. During their tour of duty in violation of their agreed contract. He’s removing their danger pay because he says it isn’t as dangerous any more. Is that right? Now that American troops are protection the opium fields in Afghanistan it isn’t as dangerous any more? I find that hard to believe. What are Canadian troops still doing in Afghanistan anyways? I thought we already pulled out. Makes ya wonder how the Central Asian gas pipeline is doing there now.