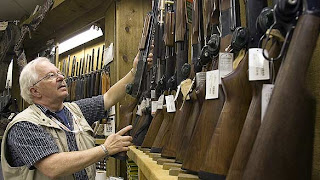 Well the vote on Gun Registry was close: 153-151. Yet the bill to do away with long gun registry was defeated. Despite the result, Prime Minister Stephen Harper said the Tories will continue to work toward dismantling the registry.

"With the vote tonight its abolition is closer than it has ever been," Harper told reporters immediately after the vote. "The people of the regions of this country are never going to accept being treated like criminals and we will continue our efforts until this registry is finally abolished."

WTF? This is why we don't give either party a majority. If they had a majority they would keep steamrolling ahead regardless of the democratic will of the people. So what's Harper gonna do when the referendum says no to the HST? Steam roll ahead and stack the Senate like Brian Mulroney did? Oh Harper already did that, my bad.

Harper is determined to pit rural areas against urban. People in rural areas are allowed to have long guns and they are not treated like criminals for doing so. Unless they refuse to obey the law and register their long guns. The registry doesn't stop farmers from owning guns.

I will agree there are some valid concerns with gun registry. Hitler brought in gun registry before he disarmed the public and took over the country. The Liberals desire to do away with firearms licenses once gun registry has been established is very suspect.

Indeed most crimes occur with firearms that were not registered. Yet some do and more would if the registry was done away with. No one is going to commit a crime with a registered firearm, unless they plan on committing suicide. If some kid is going to shoot all his classmates and commit suicide, then he won't care if the gun is registered.

If an abusive husband shoots his wife and family then commits suicide, then he's not going to care if that gun is registered or not. Regardless of the registry, there currently are too many guns in the hands of criminals.