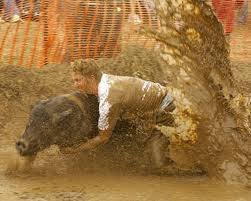 Well the piglets jumped the UN in court. It was not a consensual fight. They escaped and started it. Not charging them with assault is shameful. We cater too much to these pigs. They are not welcome or respected in Surrey.

It was a pretty lame fight. The video was caught on security camera. There was another fight Jamie Bacon was caught on video right before he was arrested showing that the pig slapping in court was just an orchestrated show.

Jamie Bacon is a piece of garbage. He's a hillbilly from ABBOTSFORD. His brothers are Preps from ABBOTSFORD. The got shot up in Surrey and moved to Abby to get police protection. What a joke that was. 24 surveillance with TV monitoring. They are the queens of Kevlar. Who wears Kevlar to Castle Fun Park? How lame is that?

This whole case reeks of police corruption. Why would they get police protection in Abby and why would the police let them go and pick a fight in court? How did they know the UN were in that room? It has the appearance of corrupt prison guards turning a blind eye to prison rape.

Claiming it was a consensual fight and not pressing charges is totally lame. Letting spoilt brats strut around like they're somebody when they're not. They're hillbillies from Abbotsford. That is all.