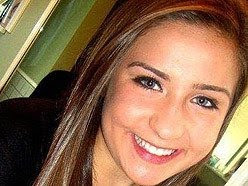 Well this is bizarre. I was going to write about the murder of Laura Szendrei because it seemed so random and tragic. She was a delta teen beaten to death in a park. Knowing I run a blog and web site about organized crime someone just sent me this new article claiming members of the Hells Angels attended the girl's funeral.

The police confirmed the Hells Angels attended the girl's funeral and said they were there to support Laura Szendrei's father. Brooks appeared uncomfortable with the question and refused to elaborate or say whether police are investigating any connection between the Hells Angels and the death.

Brooks told reporters that police have still not determined if the daylight attack on the teenager on Saturday was random or targeted. Sorry but I just find this bizarre simply because wherever the Hells Angels are, bad things happen.

Of course it's possible that the girls father had friends who were members of the Hells Angels and they simply wanted to show support for their friend. Yet somehow that just doesn't sit right. The Hells Angels are drug dealers deeply involved and primarily responsible for the Vancouver gang war. They have a history of threatening people's family. I wonder if Hells Angels attended Juel Stanton's funeral.