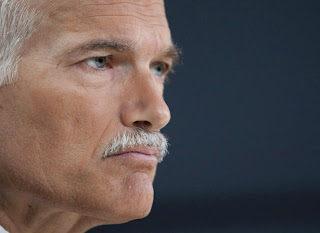 Well the gun registry debate continues and another NDP MP withdraws their support to scrap the registry. This is another example of why I hate the Liberals collectively and Michael Ignatieff specifically.

The Reform Party talked about giving their members free votes. Here we have Jack Layton walking the walk not just talking the talk and gives his caucus free votes on an issue while the Liberals do nothing but complain.

Liberal Leader Michael Ignatieff has ordered his MPs — including those who previously joined with the Conservatives — to unanimously oppose the bill put forward by Manitoba Conservative MP Candice Hoeppner, arguing that gun control is a matter of public safety.

“Mr. Layton’s refusal to unequivocally support the gun registry is playing right into Stephen Harper’s ideological crusade to see it scrapped,” Valeriote said. “If the gun registry gets scrapped it will be because Mr. Layton failed to show leadership."

This smear campaign is exactly what's wrong with the Liberals and Ignatieff and it shows why they chose someone like Ignatieff, a know torture supporter, to be their leader. Jack Layton IS showing leadership by giving his MPs a free vote on the bill. He's just not being a dictator like the Liberals would rather him be. Somewhat ironic for a leftist leader to be more democratic than the others isn't it?

However, right now I do support gun registry. Not because I believe disarming the public and arming the criminals is a good thing because it's not. Not because I like giving the government absolute power over it's citizens because I don't. Not that I think rural farmers shouldn't be allowed to have riffles or shotguns on their farm because I think they should. I just don't think people in the city should be able to have unregistered rifles and shotguns. That would only make it easier for the gangs and make it impossible for the police to charge crack houses with stockpiles of firearms.

I don't like the idea of the government knowing where all the guns are so they can seize them. Yet I don't think everyone and their dog having access to rifles and shotguns in the city would be a good thing. If you do shoot a firearm in self defense in the city, you have to control the muzzle because the trajectory of that bullet goes pass or through the target and can hit or ricochet into Innocent people and children.

Can you imagine what would happen if these wacko Anarchy protesters who loot and vandalize things were all armed with rifles and shotguns? Controlling that disturbance would be very bloody.

What if I have road rage and I pull out a shot gun from my trunk. A pump action 12 gauge shotgun can be brutal from short range. It can blow your head off. I do think assault riffles should be restricted weapons.

The bottom line is I support the status quo. I think gun registry should exist but I clearly oppose the Liberals plan to take gun registry to the next step and stop issuing new firearm licenses which would result in the complete disarmament of the general public and I applaud Jack Layton for allowing his MP's free votes on the issue. I still think a Conservative NDP alliance is safer than the Liberals and Michael Ignatieff.

Ok the latest word is that Jack Layton claims the NDP has enough voes to save the registry. He is voting to save it but is giving his caucus the right to vote how they feel their constituents want them to vote.

"My members have asked that they have the opportunity to make whatever announcement they have to make in their own ridings in their own way, because it's really from listening to their own constituents that they've arrived at this conclusion,"

Tory MP Candice Hoeppner tabled the bill, which passed second reading with the support of 12 New Democrats and eight Liberals. The Bloc Quebecois says it will vote against the bill next week, and Liberal Leader Michael Ignatieff has ordered his caucus to do the same.

While I certainly don't agree with everything every police force says, Jim Chu stands out as someone who is consistently stable with proactive insight. He has publicly come out in support of the gun registry and gives examples how it has helped public safety on various occasions. Like I said, I support the status quo. I think the registry should stay but don't think the Liberals should take it to the next step and stop issuing new firearm licenses.

BTW it appears that Stephen Harper used to be for the gun registry back in the day. Shows the history of free votes.