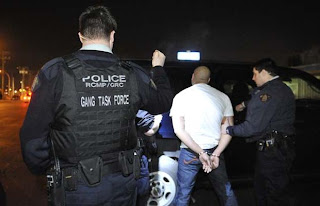 The Gang Task Force visited Prince George. As they busted a “known crack shack” run by a local gang in the 2200-block Quince Street, seizing a loaded shotgun and escorting drug dealers out of the residence, they were saluted by neighbours watching from their balconies.

“People want to know something will be done when they call us,” Smith said. Indeed. Perhaps Dawson Creek should be next on their to do list.

In a small town police officers don't have access to back up like they do in a big city. In a small town everybody knows each other. When the big gangs move into the smaller towns common sense dictates the local police should have back up from the gang squad.

That means the provincial government should make financial resources available for this. One bust is not enough to get rid of a crack house. It needs vigilant determination to follow up on it to see it through.

Mind you let's hope the bust Hells Angels crack houses as well. Moving in and only busting GTS crack houses would be insane and suspicious.