Two people linked to the Red Scorpion gang were charged with possession for the purpose of trafficking after a police raid on their Mission house. Abbotsford Police Const. Ian MacDonald said his force conducted the investigation because the two - Michael O'Brien, 28, and Mohamed Amarhoun, 27 - were suspected of supplying drugs to the street-level crews in Abbotsford.

Gee if they were suspected of supplying drugs to street level dealers in Abbotsford, I wonder who was supplying them? Let's see, police found the same red lobster disco jacket in their home as was found in Jason William Brown's home the week before. Jason had ties to the East Van Hells Angels. So who was supplying them the cocaine? No big mystery there. 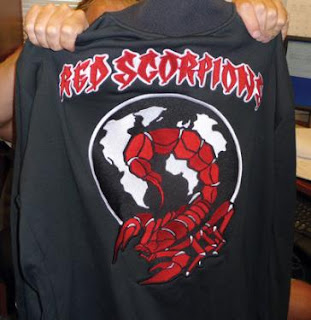 An Information to Obtain (ITO) search warrant showed that Amarhoun had links to Dennis Karbovanec, who pleaded guilty to killing three people in the Surrey Six slayings. The ITO stated it was Amarhoun that Karbovanec called when he was arrested in October 2008 by Abbotsford Police while wanted on a warrant out of Mission.

Karbovanec was stopped by police while driving his GMC Yukon near Matsqui Trail Park, and wanted the vehicle released to an associate. A search of the SUV uncovered a loaded handgun and silencer stashed in a hidden compartment in the vehicle.

So here we have the new Red Scorpions tied to the Hells Angels and to Dennis Karbovanec who was involved with the murder of the old Red Scorpion leadership that had beef with the Haney Hells Angels. Imagine that. Karbovanec was also with the Bacon brothers at Castle Fun Park with the new and improved Independent Soldiers.

On Thursday in Abbotsford provincial court, Amarhoun was sentenced to 15 months in jail, while O’Brien’s charges were stayed. Crown counsel does not reveal the reasons for staying charges. Hmmmm...

Oh and letting the Bacon disease freely walk past an open window where the UN were in a room behind an unlocked door was irresponsible and suspect.

Posted by Dennis Watson at 2:38 PM