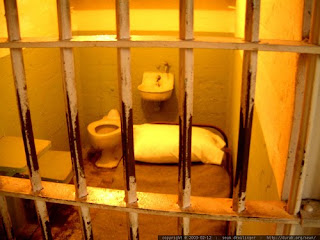 Someone sent me a photo of Mom Boucher in prison a while back and I'm like whoa, where did you get that? Then someone sent one of Deli and some of the busted Hells Angels from Manitoba in Stony Mountain prison.

Well Sunday Kim Bolan ran a photo of Clay Roueche in prison on her blog. At first I thought Clay must have sent it to her himself because it looked like a promo picture then I figured it must have been posted on Facebook.

Clay was a bit chunky before going into prison and now he's lost a fair bit of weight and actually has abs. Well good for you. You sit in prison all day and do sit ups. You're still just a drug dealer. I always thought the UN's motto about honour was rather misguided. There is no honour in selling crack or meth. I remember reading an article about how the UN beat up someone in a wheel chair for a crack debt in Vancouver. There certainly is no honour in that.

Clay showed compassion on a friend in helping him get off the crack. Yet that is what they sell. They even stamped their logo on a brick of cocaine. Reflecting on all these prison photos I had an epiphany. They're all showing off. They all think they're something special. In reality they're just kids who never grew up.

I remember visiting a friend in juvie. One week he was so proud because he was allowed to wear street runners with all the prestige those brand name runner carry. Then he got in a fight and lost that privilege. I was kinda surprised to find out how wearing regular runners was such a big deal. To me it was like, who cares, you're in jail. If you weren't in jail you could wear whatever you want.

However, someone just claimed in another post that in federal prisons inmates wear their own clothes. In provincial prisons they don’t. What’s up with that?

Regardless, these guys are all posing for the pictures, look at me look at me. Yeah I see you. You're a kid who never grew up. Look at their myspace. Even Tiny Tim. They all say their favorite movie is Scar Face. Grow up.

Posted by Dennis Watson at 1:51 AM