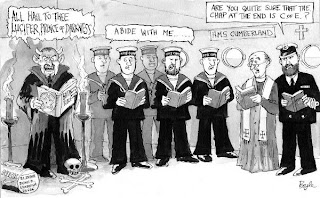 Victoria is a wonderful city. Very clean with lots of tourist attractions. They have their crack and meth problems like everywhere else. Yet the city does seem to carry a reputation of being a haven for Witches and Satanists. Personally I think it’s more of a presence of a few eccentrics then anything else.

Obviously Satanists do exist but they’re not limited to Victoria. When I was young and going through a spiritual journey of sorts, I had a look at ritual magic. I thought to myself empirical knowledge of something metaphysical would be an interesting discovery. Something spiritual we could see for ourselves.

I did some research and made a few calls. I had a meeting with a ritual magician at a coffee shop in Vancouver. I attended the interview and asked a few questions. As the conversation proceeded she kept claiming she was enlightened and everyone else was deceived. I kept asking What about truth? What about reality? What about God? She shook her head and said You’re sure stuck on Christianity. Not really I said. I might be hooked on reality and logic but not Christianity because at the time I wasn’t. I was searching.

Our interview ended shortly thereafter and we parted ways. I failed my interview but I’ll never forget the cold empty look she had in her eyes. She claimed to be enlightened but I couldn’t see any light or peace in her.

Crowley was a Satanist. I did have a problem with the Book of the Law. “Do what thou wilt shall be the whole of the law.” What a crock that is. They start off with a John Lennon Imagine twist on Anarchy where everyone is good to each other without rules or laws then take it for a nasty turn.

I did meet a Satanist in Dublin many years ago. She claimed she was a baptized in blood Satanist and that every time she came near a church she became physically sick and had to walk on the other side of the street. The friend I was with was freaked out when he saw the upside down crucifix in the room. We talked about good and evil. We talked about God and Satan. We talked about how our actions affect others and how we are responsible for our own choices. We also talked about praying to God our Heavenly Father in the name if his son Jesus Christ. I thought it was quite interesting.

It’s still not very socially acceptable to be a Satanist unless you’re a heavy metal musician trying to sell albums. Consequently I think many Satanists pretend to be Pagan or Wiccan when they really aren’t. Especially those who claim their evil master is the Satan Goddess. They aren’t Wiccan, they are something else.

Obviously good and bad exist in every person and in every organization. We all have strengths and weaknesses. Most religions teach the golden rule: Do unto others as you would have done unto you. That doesn’t mean every member of every religion is going to do what the religion teaches.

“Satanists” can exist in any religion. Christ said to the Christians “Many shall say Lord, Lord, have we not prophesied in thy name and done many wonderful works” and he states he will reply “I never knew you: depart from me ye that work iniquity.” Christ called the lawyers and religious leaders of the time liars and hypocrites while the apostle John said some religious members were liars and were in reality of the synagogue of Satan.

Indeed, if we were to go on a real with hunt for Satanists in Victoria or any where else for that matter we’d have to look in every organization including Parliament. Especially Gordon Campbell.

Posted by Dennis Watson at 3:30 AM