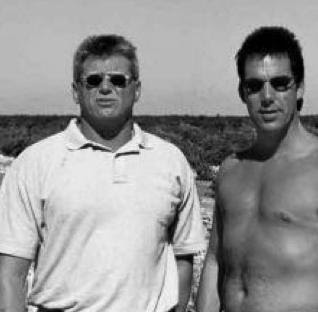 Here's a picture of Mom Boucher and Luc Bordeleau. They're not big guys. In fact Luc kinda looks like he could be one of the Backstreet boys. Luc started off in the Rockers and later became a member of the Hells Angels Nomads in Quebec.

There's kind of an interesting story about Mom and Luc in the book The Biker Trials: Bringing Down the Hells Angels. Page 52 talks about how the Hells Angels smuggled 750 kilograms of cocaine into the country on the Fortune Endeavor. They dumped the 750 kilos of cocaine overboard in plastic bags weighted down.

Mom and Luc went to recover the cocaine using sonar. They tried for eight days but couldn't find it. The cocaine was located about a year later by the Canadian Armed Forces. Seemingly that deal was done with Rizzuto's right hand man Desjardin.

Interesting to note that Paris Christoforou was with Peter Scarcella when they did that botched hit in TO that paralyzed an innocent bystander. Scarcella aligned himself with Rizzuto after his boss that he drove for ended up shot in the back by someone he knew.

Guy LePage plead guilty to helping the Hells Angels buy cocaine from a Colombian drug cartel and ship more than 1,600 kilograms of the drug to Florida in 1997 and 1998 that was destined for Montreal.

The book goes on to describe some of Mother dearest's beginnings as a drug user and petty thief. Just like Robert Thomas he has a list of break and enters and theft. He stole cigarettes, TVs and electronics.

November 1975 he and a friend burst into a Butcher shop and robbed the 71 year old owner with a riffle and a butcher knife. After Boucher graduated from armed rape he started the Nomads. After the murder and betrayal of the Death Riders leader which helped the Hells Angels take over the drug trafficking in Laval of course.

So Mommy dearest started off as a petty thief and a rapist and made it to the big leagues. Amazing what a little guy can accomplish with a gun and a knife. Too bad the knife was found in the backs of those he saw as a threat to his leadership.