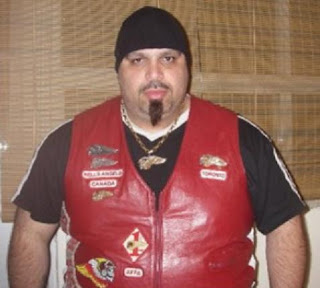 I didn't realize they made Hells Angels corsets. This is Shane Bigman, also known as Mohammed Ghafurean. He has a facebook support group because someone "lied" and he was wrongfully arrested. Where have we heard that before?

I noticed Sophia Loren is a member of that group. Does she really believe that nonsense? This isn't H Block. They're not political prisoners. They're cocaine dealers! Toronto was the hub. Look at Niagara close by. All they did was sell drugs.

That police agent didn't lie when he made 27 drug buys from various club members. Sure Ward had been involved in the local drug trade a long time. That's why the Hells Angels chose him. To take over the drug trade. Those old farts were even selling date rape drug.

In fact, cry baby in court, Mark Figuereo was caught trafficking GHB in Toronto. When he got caught and realized he'd have to do time in prison he cried. What a farce. Mark Figueiredo, 30, wept as he hugged his wife, sister and niece before he was led away in handcuffs. He was using his wife, sister and Niece for sympathy in the court. What if someone used the date rape drug on them? What a spineless pig.

Ontario are all patchovers. They betrayed their own club to join yours. Why are you so surprised when people turn you in? You’ve built an army of traitors to sell crack, meth and date rape drug. What were you thinking?

Someone used the term support Nanaimo 81 in our forum and someone else asked them why big bad bikers needed a support group and asked if they should bring Kleenex. Believing those bullshit stories is sad indeed.

And don’t tell me “Oh the Hells Angels would never associate with someone like Robert Pickton.” They did. They attended parties on his farm at Piggy’s Palace. Robert’s brother Dave was a Hells Angels associate.

Speaking of Toronto Hells Angels, let's not forget Paris Christoforou who was with Peter Scarcella when they did that botched hit in a Toronto Sandwich shop that left an innocent woman paralyzed. More Kleenex for the guys who shot her? Not likely.