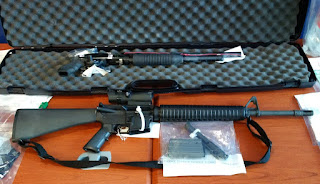 BC Local News is reporting that "Forty-three people are facing charges after police officers made several drug and weapons busts in Dawson Creek and Fort St. John. The Combined Forces Special Enforcement Unit began an investigation into street- and mid-level drug traffickers last summer. On Friday, the unit revealed the haul of drugs, weapons and cash it seized as a result of the probe, and the details of the charges." Big city crime expanding into small towns.

Among items seized were a rifle, shotgun, AAR15, 74 ounces of cocaine, Approximately 700 fentanyl pills, 3.5 grams of crystal methamphetamine and 1.75 litres of liquid GHB. 29 people have been arrested, while another 14 are still on the run. Charged so far are Jamie Christopher St. Denis, 37, Christina Marie MacKay, 30, in Dawson Creek and Ryan Holden, 36, of Dawson Creek each face numerous drug and weapons charges.