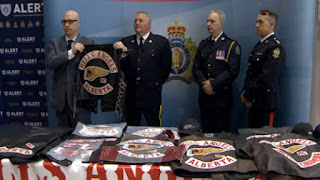 The Edmonton journal is reporting that Two Edmonton members of the Hells Angels motorcycle gang have been arrested and charged following a lengthy investigation that led to the recovery of $1 million in stolen property, the seizure of 21 firearms and eight other arrests. Led by the Alberta Law Enforcement Response Teams or ALERT, the organized crime and gang investigation squad uncovered a scheme involving members of the Hells Angels, support clubs and associates who were allegedly involved in theft, putting new vehicle identification numbers on stolen vehicles, and selling stolen vehicles." Johnny Newcome dejavu.

"Among the numerous stolen items were 17 travel trailers, three pickup trucks, six all-terrain vehicles, one snowmobile, two dirt bikes, 18 rifles, two shotguns and one handgun. Knibbs said two of the people arrested, Christopher Escott, 32, and Julien Roussel, 58, both of Edmonton, were full patch members of the Hells Angels." Once again this was an ALERT bust not EPS.

CBC is reporting that the investigation began in Drayton Valley. Home of the Dirty Flu. Thank God for the Alberta Law Enforcement Response Teams because the Edmonton Police service is compromised. I have heard many acusations about the Edmonton Hells Angels that are too henious to even mention.

Update: The Edmonton Hells Angels are running up quite the rap sheet. Clearly they are heading down the same road as the Kelowna chapter who is in court because the police are trying to seize their clubhouse under proceeds of crime and well they should. The Kelowna chapter was a cesspool of criminal activity deeply involved in drug trafficking and stolen vehicles. Rats galore. Skeletor still hasn't made bail. His coaccused was sentenced to 16 years in prison.

In 2012 two Edmonton Hells Angels were convicted of enforcing for the main drug traffickers in Fort McMurray. They lost their appeal. The Edmonton Hells Angels supplied the White Boys Posse a neo-Nazi group of drug dealers selling cocaine all over northern Alberta that were responsible for numerous heinous murders over drug debts.

April 2014 the Alberta Gang Task force targeted the Edmonton Hells Angels. Full patch Hells Angel Blake Christie and his associate were the original targets of the investigation. Blake never made it to trial. July 2015 he was found dead.

June 2015 three Canadians from the Edmonton chapter were arrested for a brutal assault in Greece which turned into a murder charge after the victim they swarmed died of his injuries.

February 2016 Edmonton Hells Angel Dominic DiPalma Jr. was arrested with a kilo of cocaine. Previously I had reported that he was the one in charge of the Whiteboy Posse's drug trafficking network. March 2016 Dominic was sentenced to six years in prison for drug trafficking.