Gas shortage in the Interior of BC 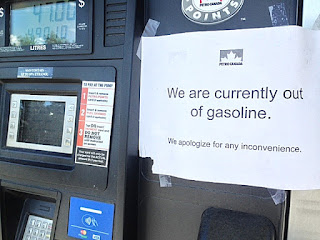 This is a story that was easy to miss in metro Vancouver. News 1130 reported that "You’re going to want to fill your gas tank before heading to the interior or anywhere east of the Lower Mainland. A fuel shortage caused by damage in Alberta’s wildfires is hitting more gas stations in BC. Kamloops, Kelowna, Vernon and now Merritt are either seeing pumps turned off or long waits at those stations that are still running. Dan Mcteague with Gasbuddy.com says the Vancouver area likely won’t be affected as fuel here is sourced from elsewhere."

I was speaking with a guy in Surrey who said he recently came back from a trip to Vernon and the gas stations there ran out of gas. It was partly because of the Fort McMurray fires and partly because of a problem at Suncor Energy’s Edmonton refinery.

I know deep down we all want to be tree hugging vegans but sometimes we need to remember life in the real world isn't always that simple. A few years ago I was handing out fliers outside the Art Gallery in Vancouver. A couple of young transient anarchists started to heckle me. One of the guys shouted out How many trees did it take to make your fliers? Without hesitation I shouted back How many trees did it take the last time you went to the bathroom? The guy just looked stunned and turned to his girlfriend as if to say what the hell is that guy on about? She just looked at him and said toilet paper. It takes trees to make toilet paper. Now he was really stunned and didn't know what to say. I guess in reality we do have to cut down some trees after all.

The same with the oil industry. We can legitimately argue who killed the electric car but in the real world we still need oil. We can't all ride bicycles to work all year round and wipe our asses with leaves. That's just not reality based. Yes tar sands are dirty but sometimes life isn't as simple as one would hope.

I made a post about how natural gas is clean burning while burning coal is not. That is a very true statement. Some people expressed concerns about fracking which is understandable. However, some people will protest anything no matter what we do. The best thing for China would be to help them build some hydroelectric dams. Not only has hydroelectric power served Vancouver well but it is also very cost efficient. Yet some people will even protest that which once again means no matter what we do some people will protest. That's why we have to use good judgement and make up our own minds for ourselves.